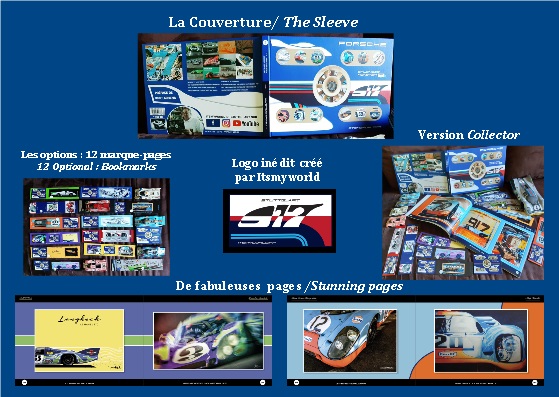 Thank you very much for ordering this 4th book. Here are the explanations of the (sometimes far-fetched..) tricks you will find.

If the turbine is not exactly the same as the 917, this choice allows to show more illustrations. Placing a shadow on the 2 of Splendid Monster creates a ''22'', the number of the KH Martini which is particularly honoured in this book, including on the cover and the unpublished 917 logo. And as this is the 4th ITSMYWORLD book, the two are consistent. On the back, block 71 shows in order the 17, 18, 19, 21, 22, 23 that raced this year. On the side of the silhouette, the Bosch, Firestone and Bilstein stickers are replaced by… Facebook, Instagram and YouTube…

3: the Hippycar of course, as in the first Splendid Monster.

6 and 7: the relationship with the Auto Union.

12: in addition to the 12-cylinder, one of the first, all sober by David Pauli.

14 and 15: initially I asked Eric Furr to place the 14 on the left to be consistent, but he preferred this version. Artists have to be free!

18…19…20…21…22…23 : some of the most mythical 917s have these numbers, so as for the first Splendid Monster, I took this nod to PORSCHE history. Note that the Salzburg 23 is an original creation by Eric Pawlak for this opus.

44 : even if the real Hippycar is chassis #43, the regretted Tommy Kortmann regularly admired replica #44 as a volunteer of the Simeone museum…

52: obviously, they didn't race the same year, but this illustration by Robert Matthews allows the transition with the ….

53 : the magnesium chassis of the Martini 22, hence the more technical pictures by Sébastien Sauvadet, Sébastien Lbl and Atelier 23.

54 : two Can-Am and an Interserie equipped with the 5.4l block in Michel Mullenbach's collection.

56 : logically, the Zitro Racing is wearing the 57, but we remain in the Artistic category.

70: the inevitable Steve McQueen film takes place in this year.

71: the KH Martini 22 is the central theme of this book. Pia Redart opens her chapter.

76: In the background, an LH Gulf. This version is presented next.

77 : as always, this page is made by Jean Marc Merger/ Bol Concept

140 : to thank the fans, and to bring a bit of freshness, what could be better than flowers…? Especially when we find the Hippycar's colours…! It also allows to finish with a picture of Mike Ahrens, who started the book.

In the presentation, by mistake, I described these tips as ''anecdotes'': please excuse me. Speaking of mistakes, the more faithful among you will notice that a photo was already present in another book… Who will find..? […] And that there is a missing ''h'' in a text, seen too late, and that didn't seem to me to justify wasting time.